What is Service-level Fault Injection Testing?

This is the second post in a series of posts on our upcoming ACM SoCC ‘21 paper, “Service-level Fault Injection Testing” leading up to the open-source release of our prototype implementation, Filibuster. In our previous post, we talked about the challenges of doing resilience engineering research on microservices due to the lack of an application corpus and proposed a new application corpus, from a survey of work on chaos engineering, for future researchers of resilience engineering.

In this post, we will discuss our technique for identifying resilience bugs in microservice applications, called Service-level Fault Injection Testing (SFIT). SFIT takes a developer-first approach, integrating fault injection testing into the development process as early as possible without requiring developers to write specifications in a dedicated formal language. This decision is key, as it seamlessly integrates our approach into developers’ existing development environments and toolchains.

As we described in our first blog post on Filibuster, we specifically target the types of resilience issues that are able to be identified during development, in the local development environment, with traditional mocking techniques. As far as a methodology for fault injection, we build on observations made by systems as early as Ferrari (1995): lower-level faults – from hardware faults to operating system faults – can be tested in the application layer by triggering the coorresponding application-level manifestation of that fault. As far as implementation is concerned, we follow in the path of systems like LFI (2009) and AFEX (2012) focusing on library-level fault injection through method or function interposition.

The architecture of Filibuster, the prototype implementation of SFIT, is shown below. In this architectural diagram, we see an example where Service A talks to B, and B talks to C before returning a response back to the caller. At each step of communication, interposition placed at Service A, B, and C’s server and client libraries communicates with a centralized testing server in order to know when remote calls are made, where they are terminated, what they return, and whether or not to inject a fault. 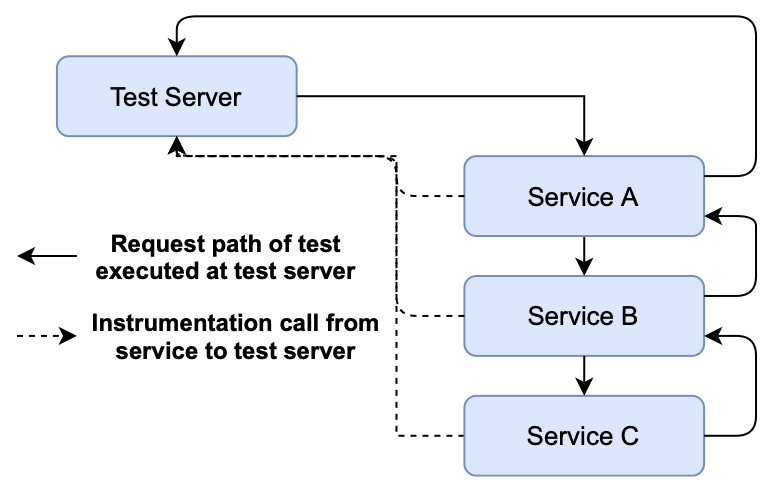 SFIT builds on three key observations we made about how microservice applications are being developed today:

As we will show, SFIT, as a technique, exploits these three key observations.

Let’s look at how SFIT, starting from a single passing fault-free functional test, can be used to generate the additional tests needed to ensure resilience.

SFIT starts with a passing end-to-end functional test written by the application developer that exercises some behavior under some fault-free scenario and asserts the correct outcome. We assume that this test is already passing, is nondeterministic, and all logical errors have been ruled out – with the exception of logical errors contained in failure handling code that is not currently being exercised by this test.

SFIT starts by executing this initial fault-free execution, and at each point where we reach a location where remote communication occurs to another service, an additional test execution is scheduled for each way that the calling service’s communication library can fail: if you’re familiar with a system like SAGE (2008), this will sound similiar to the mechanism SAGE uses to schedule all possible alternative executions based on negating all conjuncts of the current path condition. For example, if Service A goes to communicate with Service B, and we know the library that Service A uses to communicate with Service B can raise a ConnectionError or Timeout, we know that we need to execute the test two more times: one to explore what happens when that call throws each of the two possible exceptions. This results in a depth-first search of the fault space, starting from the root service.

For a more detailed example, consider the reproduction of part of the Audible service taken from our survey. We’ll assume for now that the calling library can only throw two possible errors: a ConnectionError for all services and a Timeout where a timeout has been specified at the callsite.

In this example, the request from our functional test originates at the Audible App. The first request issued is to the Content Delivery Engine which can fail with a Timeout or ConnectionError. We add two executions on the stack of executions to explore and continue executing the test.

In this example, several services have multiple dependencies; for example, the Audible Download Service talks to the Ownership service, the Activation service, and the Stats service. In this case, we have to schedule executions that cover the entire space of failures — all of the ways each service can fail independently with all of the combinations of how they can fail with one another.

As the developer runs these generated tests, they will have to adapt their functional test accordingly to consider failure. To do this, we provide a helper module that allows the developer to write conditional assertions for the executions where a failure is present.

Our approach relies on the ability to inject failures for remote calls and therefore it is essential that we can instrument the library used for making remote calls to alter their response. This ability to interpose on remote calls is already rather commonplace: many popular telemetry systems (e.g., opentelemetry, opentracing) already provide libraries that automatically wrap calls to common libraries used for remote communication (e.g., HTTP, gRPC) in order to assist developers in understanding application performance by sending telemetry information to a remote telemetry service (e.g., jaeger).

We leverage this instrumentation design for fault injection: instead of returning the actual response from the remote service, we return a failure response instead based on the fault that was injected. This instrumentation communicates with a server process that aggregates information collected by the instrumentation in order to determine the next test to run.

Our approach injects faults that represent the failures that can occur for a given service. This relies on knowing two different types of failures:

One of the difficulties with HTTP is that requests made between different services use a URL provided as a string. This string may not be a unique identifier of the actual service that is being contacted, as these URLs may use IP addresses or unrelated DNS names.

When one of these instrumentation calls is received by the server to identify the target of a remote call, any service-specific failures (e.g., GRPC FAILED_PRECONDITION, HTTP 404 Not Found) are also then scheduled as additional test executions. SFIT cannot schedule these errors until it knows the target of the remote call – i.e., dynamic binding has been resolved at runtime after the call has been issued.

To do this, we provide a helper module for writing conditional assertions. This helper lets the developer write a conditional statement such as if a fault was injected on Service A and place appropriate assertions on what the behavior of the system should be under failure. Developers will add these conditional assertions into the existing functional test. We do not believe this to be an intrusive process, as the manual approach (using mocks) would require test duplication, each with custom assertions. For a similar reason, we avoid static test generation and favor a dynamic approach where large numbers of tests do not need to be consistently regenerated during software development.

We imagine a typical workflow as the following. Developers start with a passing functional test and SFIT begins injecting faults. As faults are injected, the functional test will fail with assertion errors. Using the helper, developers will write an conditional assertion to capture desired failure behavior. An example of one such assertion for the Audible application might say if a fault was injected on the stats service, the service should still play the audiobook. From there, the developer can use the counterexample to replay the previous failing test to validate these newly added assertions.

The following is a coverage report for a small cinema application we adapted from a microservice tutorial written by RedHat. The functional test we started with only exercised the golden path: all services reponded without failure. SFIT was able to close the gap and generate the tests for all possible failure paths; we highlight the automatically generated coverage in yellow. 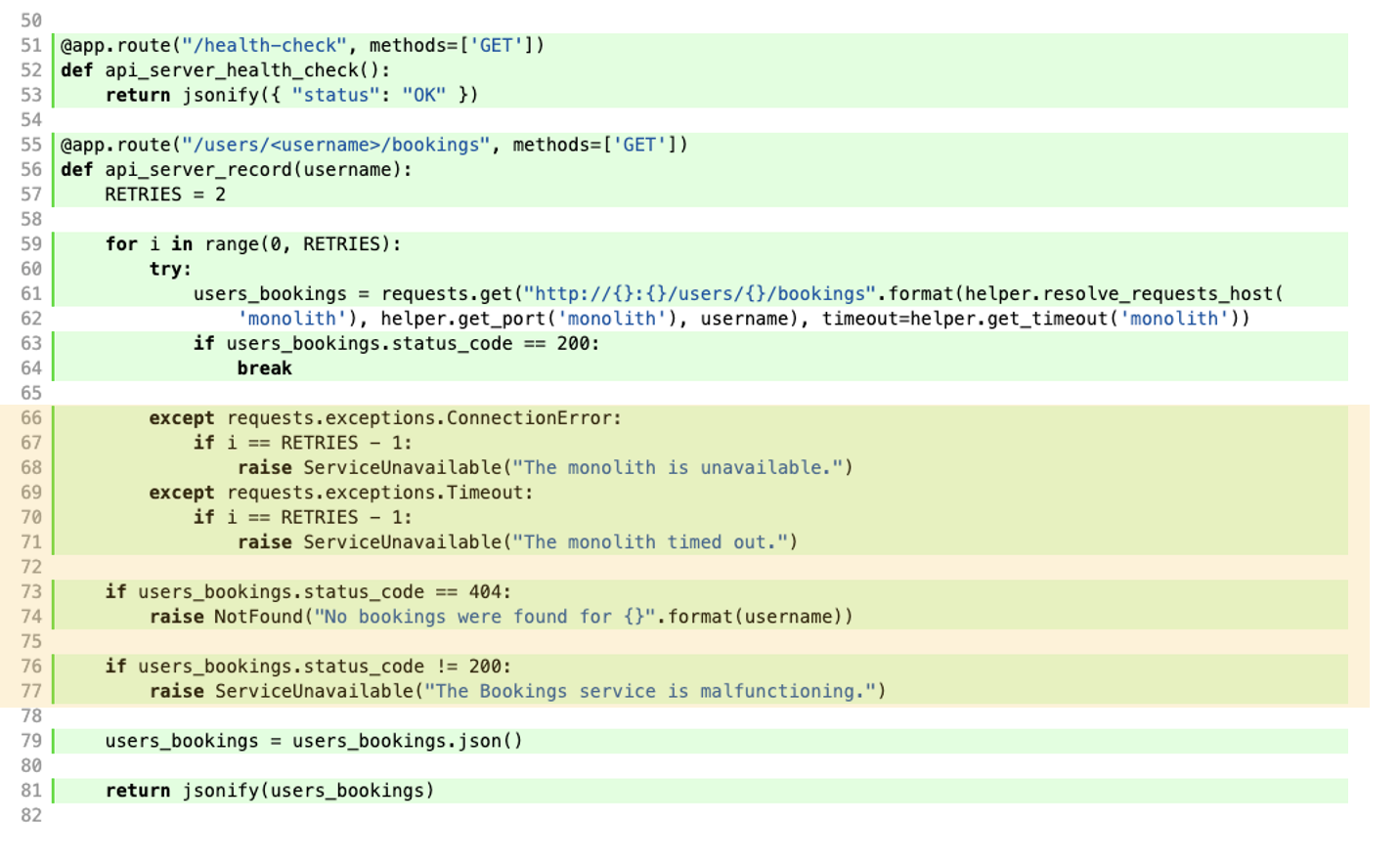 In this post, we provided an overview of our new fault injection technique for improving resilience of microservice applications named Service-level Fault Injection Testing. After reading this, you might be left with a few questions, for instance:

We’re going to answer each and every one of those questions throughout this week.

In our next post, we’ll look at how to actually use Filibuster, our prototype implementation of Service-level Fault Injection, to test a real application using code samples. In our fourth post, we’ll look at algorithmic improvements we can use to reduce test case redundancy and make our system perform at scale.