This blog post was written by Eunice Chen, an undergraduate student who contributed to the Filibuster research project this Spring. Eunice did an excellent job extending Filibuster with a prototype of Redis support. She recently gradudated and we will miss her! Congrats, Eunice!

The automated resilience testing tool, Filibuster, lets developers test microservice applications for resilience against remote service unavailability. Filibuster achieves this by instrumenting remote procedure calls (RPC), commonly made using libraries like gRPC and Python’s requests, to perform a systematic exploration of all possible RPC faults for a given microservice application. However, the current version of Filibuster does not support fault injection when client libraries for databases are used to issue the remote procedure calls. In this article, I discuss work that I performed as part of a student research project in the Composable Systems Lab, part of the Institute for Software Research at CMU, to explore the viability of using Filibuster to test external services that use 3rd party client libraries such as Redis.

Since microservice architectures are often used for web application backends, it is critical that Filibuster not only test services that communicate with other services, but also test services that communicate with databases, as databases play an important role in data persistence in backend services. Expanding Filibuster to support this style of fault injection on databases, and in the specific case Redis, will allow us to create a prototype and inform future research and engineering efforts towards this goal.

We started this work with two interesting questions:

Let’s work with an example.

To explore what a design for database fault injection might look like, we decided to start by expanding one of the examples in the Filibuster application corpus with Redis, an in-memory data store often used as a cache. The Filibuster application corpus contains several example microservice applications, some of which are reproduced from industry to demonstrate different request patterns. Request patterns that are exemplified by the corpus range from retries on failure, to fallback requests, to using default responses on failure, as well as the different types of ways requests can be structured and nested.

The example we chose to expand was one of the Filibuster corpus’ cinema examples. It consists of four services: users, bookings, showtimes, and movies. These services allow the user to retrieve user information, book movies, retrieve showtime information, and perform other actions one might expect from a cinema site. 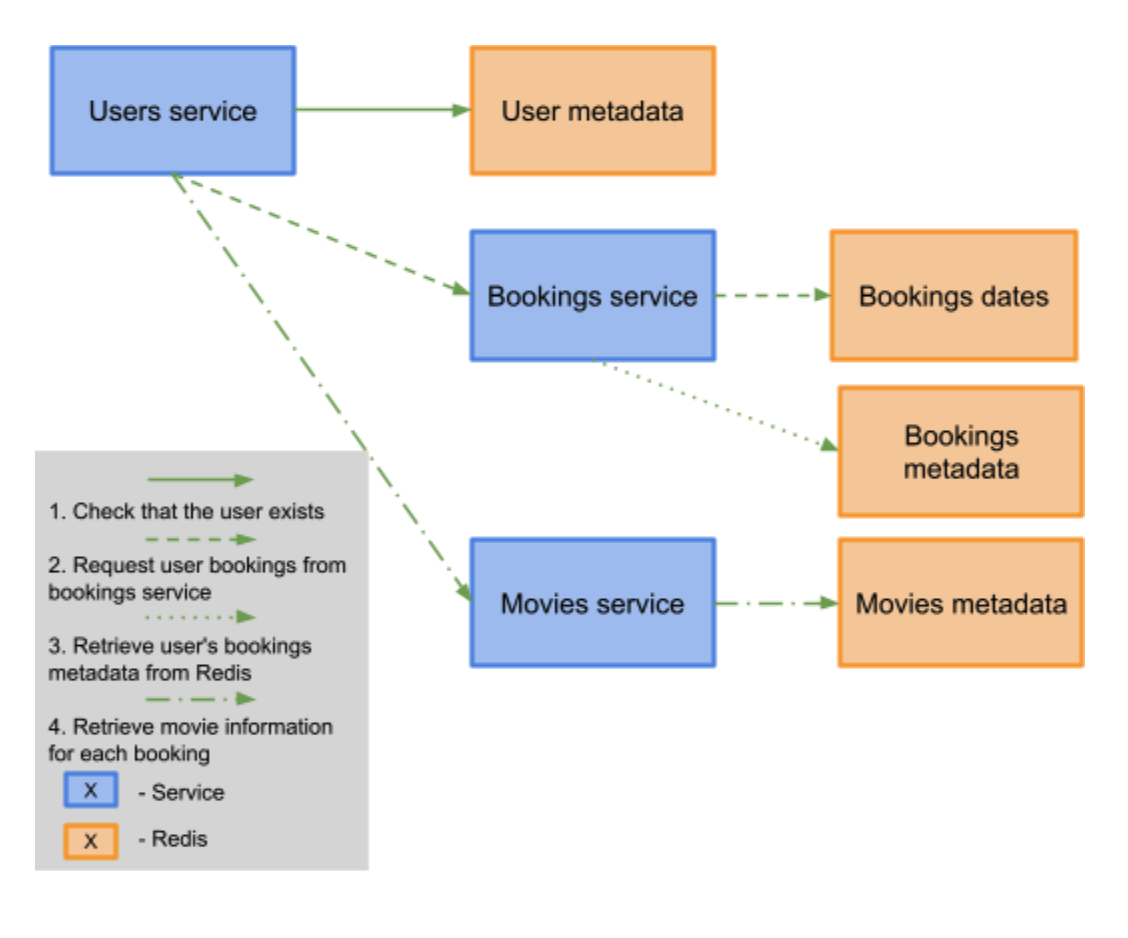 Once the bookings service receives this GET request, it takes the following steps:

We start with the basic functional test behavior that would exist prior to our adaptation for HTTP RPC fault injection.
Our test asserts that if the response code from this call is 200 OK, which indicates success, the data returned matches the data associated with the chris_rivers user.

To handle the cases where Filibuster has injected faults for the HTTP RPCs, we add conditional code to account for behavior under failure.
In the case where an RPC fails, our test asks Filibuster to verify whether it injected a fault, i.e., that the fault was intentional — this is done using the was_fault_injected() conditional. Our test asserts that if the RPC failed, Filibuster did actually inject a fault and the HTTP status matches the expected status when the call fails. In this case, since the only errors we expect are a 404 Not Found or a 503 Service Unavailable, we assert that the status code must be 404 or 503.

We excerpt the test below:

To run Filibuster with our functional test, we can run the following command which will inject HTTP exceptions at each RPC call site.

Below is the additional Filibuster configuration containing these new faults:

Once we modify the list of faults that Filibuster uses for fault injection to include Redis, we can rerun our Filibuster command from before. Filibuster will systematically inject these Redis errors (along with the HTTP RPC faults) one by one, then in combinations, while repeatedly executing our functional test.

Before, our test asserted that if the call failed, then the fault was intentional and the HTTP status matched the expected status. We change our test to expect a 424 response code in addition to a 404 error:

Once run, we see that the test now passes the previously failing test.
Therefore, we know that we have fixed this particular bug.

Finally, we can run Filibuster again and test for the whole default set of failures as well:

From our output, reproduced below, we can now see that everything passes.

Because Filibuster exhausts the failure space and everything now passes, we know that the application behaves exactly as specified by the functional test. Specifically, we know that the endpoint returns the correct data (in the case of a 200 OK response), or that its failure behavior matches the expected behavior (i.e. a 404, 503, or 424 response). In either case, because we have correctly handled any exceptions that may arise, we can verify that the application does not fail in unexpected ways when one of the services it depends on fails.

For this example, Filibuster ran 73 tests: 72 generated tests from the original test plus the original test itself. Without Filibuster, developers would have to write 72 tests manually in order to exhaust the fault space. However, Filibuster does this automatically. In doing so, it is able to prune 19 redundant tests (for more information on how this is done, see this post). It completes this entire process in only 9.1 seconds, allowing developers to test their code quickly.

When we started this work, we had two questions:

After building our Redis prototype, we can now begin to answer them.

While this prototype demonstrated that many of the design decisions made in Filibuster itself were correct, we also discovered several ways where we believe we need to modify Filibuster to support further, in-depth testing of database clients. One specific way is simulating different types of failures – not spurious faults – in Redis, based on the Redis method that is being called. We demonstrate this using an example below.

With respect to HTTP RPCs, whenever we want to inject a failure that doesn’t cause an exception, we can simply return an HTTP response back to the caller containing the associated status code to indicate failure. This is similar to GRPC as well: a single GRPC return type is provided and a status field set indicating the type of failure. However, with Redis, different return types are used depending on the Redis API used.

For example, the hget method, which gets the value of a hash field, may return a different type of value than the sismember method, which determines whether a given value is a member of a set. The hget method can return strings, integers, or None, whereas the sismember method returns only 0 or 1 depending on whether the value is or is not a member of a set. If the user calls redis.hget(id), and the id does not exist in the database, then Redis will simply return None. However, if the user had instead called redis.sismember(set_name, id) for an id that didn’t exist, then the response would be 0 (i.e., False). Since what constitutes a failed response varies based on the Redis method called, we are exploring different ways Filibuster can simulate those failures. In doing so, we can expand the way the Filibuster tool interacts with microservice applications.

Through this work, we have extended Filibuster to support Python’s Redis library. In doing so, we have learned that it is feasible for Filibuster to be successfully extended to more languages and database implementations. At the same time, we raised interesting new questions and have found new directions for the Filibuster tool to grow in.