As part of the curriculum of Carnegie Mellon University’s 17-313 Foundations of Software Engineering, we teach agile development. To aide in reinforcing the material, we typically teach a recitation based on a common agile introductory activity where students build paper airplanes in groups, in class.

The recitation roughtly works as follows:

The teams are provided a few minutes to review the designs before we start the agile simulation. In this simulation, each team is randomly given, by the product owner (the instructor) a design, and is told to build as many planes as they can in 2 minutes. Students then “plan” for the sprint, by providing an estimate of how many planes they can build, with the information that I, the instructor, will review the planes at the end of the sprint, test them to see if they fly, and accept each plane that works. The team at the end of two sprints is the “best” team that wins nothing but the bragging rights of the recitation.

It goes as you would expect.

First, most teams decide that each team member will build a number of planes and offers up their number. They add them up and that’s how many planes they are going to build. It’s usually in the 10 - 20 per student, being overly optimistic. During the sprint, we observe one of two behaviors:

Typically, students then use the second sprint to adjust. Most switch to a Henry Ford-style assembly line at that point and switch to pipelining development based on who understands what part of the design along with massively reducing their estimates. All of this is based on a retrospective they hold before the next sprint. Most, if not all groups, deliver much closer to expectation, which a much higher yield of accepted planes the second time around.

However, we live in COVID-times, where recitations in the second half of the semester are held remote.

So, what can we do the simulate the same type of learning in the online environment?

Goldilocks Story as the Agile Prompt

This year, we tried something different. Adapting material from Mark Levison about running a comic-book creation activity to teach agile, we set out to teach agile using the same comic-book story, but completely online. Mark runs a cool activity where students of agile are taught to learn agile by building a comic book version of the Goldilocks and the Three Bears story on paper in his classes, but I decided it would be fun to try to do it in the online format, using Google Slides, by building a one-page emoji-based comic. This idea was influenced by the fact that I had observed our students enjoyed reacting and telling stories in class using just emoji – as well as the fact that writing a story with pure emoji was both a fun challenge and a way to bring students creativity into the classroom.

We started by prompting students two days ahead of the recitation to revisit (or visit for the first time) the story of Goldilocks and the Three Bears.

When students came to recitation, depending on the size of the online class in Zoom, we would split into multiple teams (if > 4, multiple teams; if not, a single team.) I would serve as the product owner, presenting students with the product backlog, in priority order.

The product backlog consisted of the following:

As you can see, the product backlog is purposely designed to introduce potential problematic points. First, several of the low priority tasks are of low complexity: adding PSAs, links to downloads, and credits. These serve as tasks that seem easy to add in a single sprint, but would cause the product to be developed in a order that didn’t match the organization’s expectations. Next, you’ll notice that one task (task 5) is purposely ambiguous, that may result in work being performed where it may be rejected by the product owner if it wasn’t properly reviewed first. Finally, we provided a small one sentence summary stating that it should be a single page comic that used emoji.

Then, I assigned a time table for the 50 minute slot and how the time should be broken down. I include it below.

There we go. So, let’s look at what we learned, shall we?

So, what did we learn after four recitations of this in the Fall 2020 semester, running this purely online? 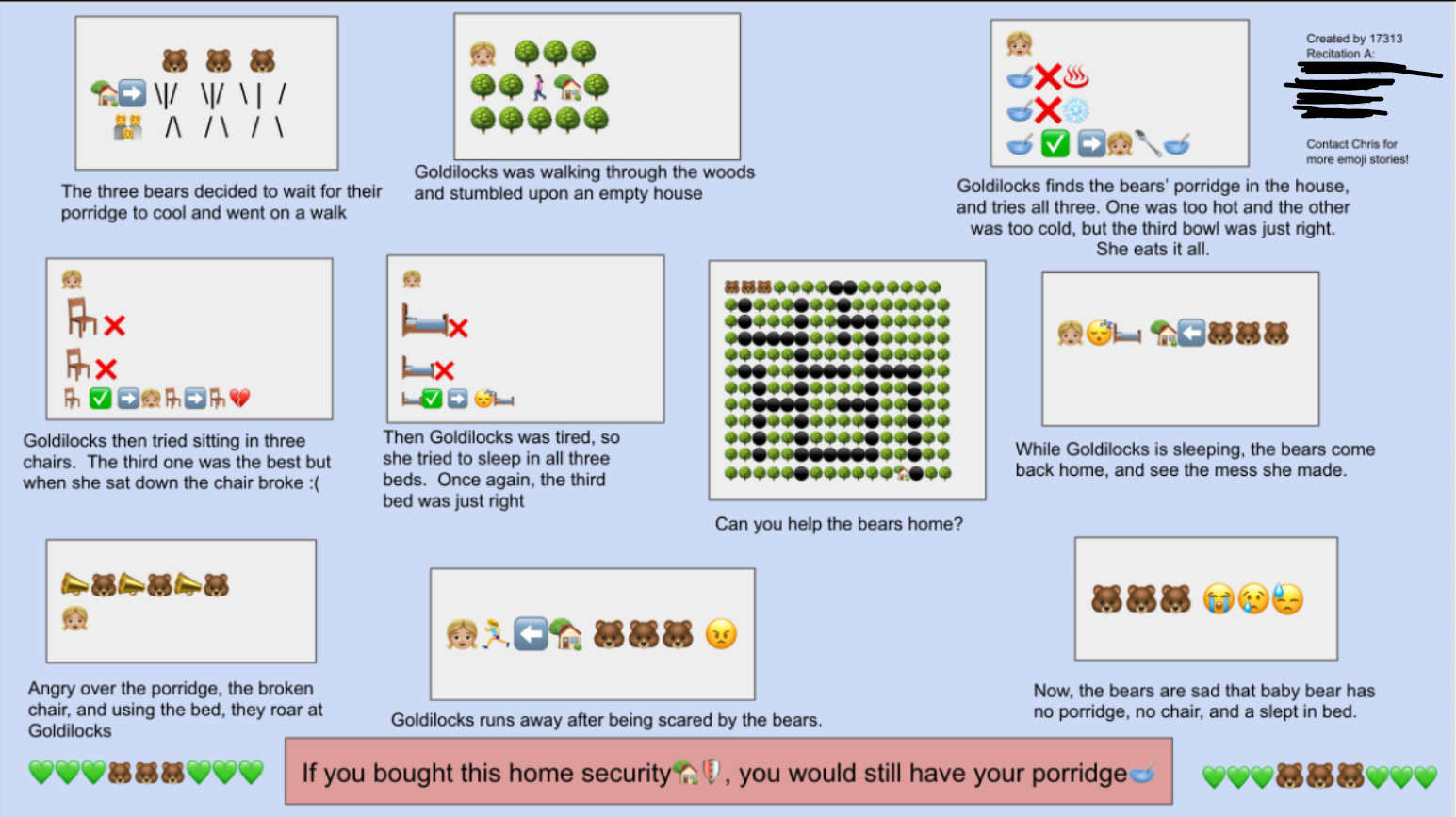 All in all, our class made seriously good comics this year and I am super impressed. I’m hoping you can learn what we did to make your agile teaching in a COVID world better in the future!

This is one way to teach agile in the COVID-19 world through Zoom. I’m sure their are others. What are yours? I’d love to hear more!